You Can Help Save the Bilby 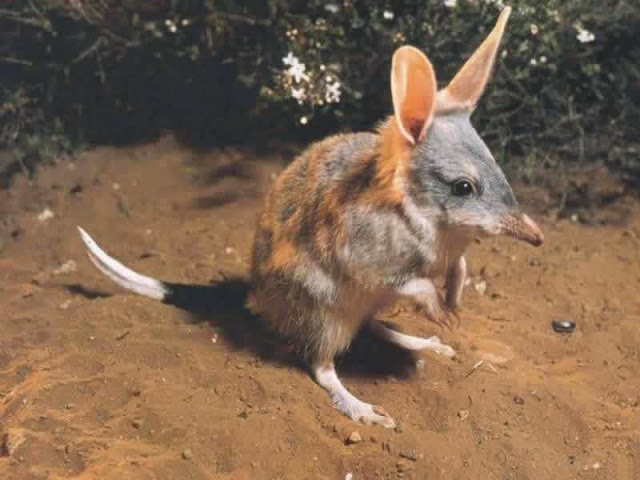 Recently, I had the chance to see and pat a Bilby at the Royal Easter Show in Sydney. There, a representative from the Save the Bilby Fund explained that there are only 400 bilbies left in the wild.

However, before I tell you how you can save the Bilby, perhaps it would be a good idea to explain what the heck a Bilby is! To many people outside of Australia, and some within the country,  you may have never heard of a bilby before. (Even as I type this post, my Safari word editor doesn't recognise the word 'Bilby').

A bilby is a nocturnal marsupial native to the arid and semi-arid areas of Australia. They have a long snout, long tail and long 'rabbit-like' ears and thus have been coined as the 'Easter Bilby' in Australia, as rabbits are not native to the country.

They are omnivorous animals whose diet includes fruit, fungi, seeds, bulbs, worms, insects, termites, spiders and small lizards. They are also fast breeders; with a pregnancy that lasts from 12 to 14 days.

However, according to the Save the Bilby Fund, it is believed that the numbers of the bilby population has decreased due to a number of reasons:

- One of the major reasons threatening the bilby population was the result of the introduction of foxes and feral cats, who prey on the bilby.
- The habitat of the bilby has also been reduced due to the farming of such animals as cattle and sheep, who also compact the soil with their hooves.
- The introduction of European rabbits to Australia has also meant that the bilby has had to compete with rabbits for food and burrows.

However, there is still a chance to save the bilby. Through Save the Bilby Fund, you can make a donation to the conservation organisation, purchase merchandise, make a corporate sponsorship, learn about and celebrate National Bilby Day, become a volunteer or purchase Darrell Lea chocolate Bilbies at Easter time.

Image: University of Queensland
Posted by Unknown at Thursday, April 12, 2012

Email ThisBlogThis!Share to TwitterShare to FacebookShare to Pinterest
Labels: Be the Change, Conservation, Explore, Get Involved, Home&Fashion, Impacts, The Lowdown