Waking Up To Happiness 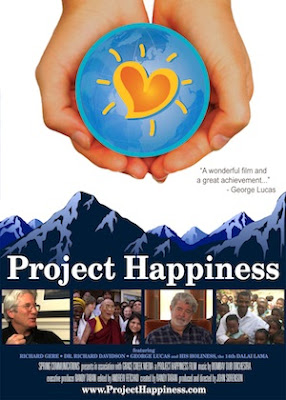 What is happiness? And how do you achieve it? These are a couple of questions that 'Project Happiness', a film by Randy Taran, seeks to answer.

A couple of friends and I had the privilege to see the film when it was screened by the inspiring social movement group Wake Up Sydney. I loved the film, which followed three groups of teenagers from the USA, Nigeria and students from a school for Tibetan exiles living in India as they searched for what happiness meant to them and how it was achievable. The film also included interviews with George Lucas, Richard Gere and His Holiness, the Dalai Lama.

It was especially nice to see that 500 like minded people had gathered at the Randwick Ritz Cinema to watch the inspiring movie hosted by Wake Up Sydney.

Project Happiness kicked off Wake Up Sydney's film screenings for this year, with a film event held once a month. Next week they will be holding another special event called 'Leaving your Legacy'. To learn more about the great actions that Wake Up Sydney are encouraging, visit their site here.

To see what happiness is and more importantly, how you obtain it, follow this link. The answer may just surprise you.

Email ThisBlogThis!Share to TwitterShare to FacebookShare to Pinterest
Labels: Be the Change, Explore, Films+Books, Home&Fashion, The Lowdown